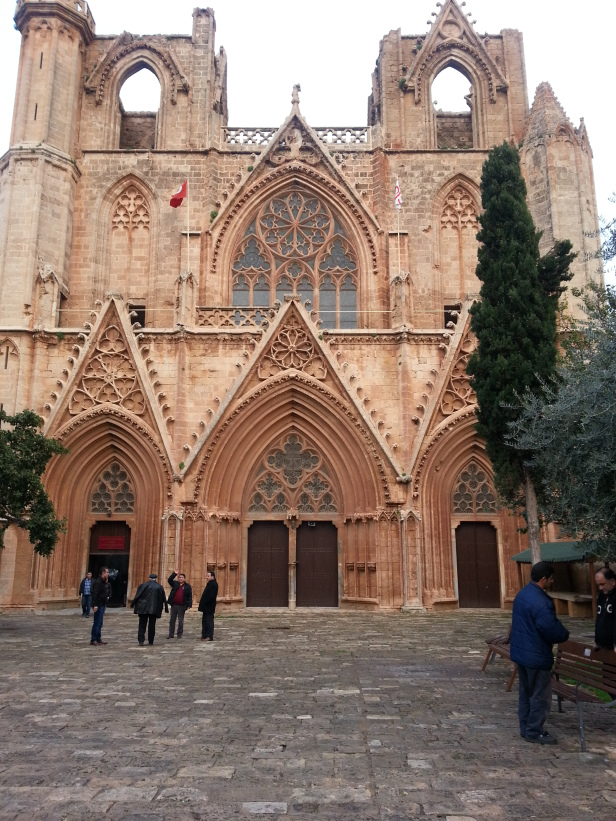 The building of the church started around 1300, though it is thought to be on the remains of an earlier church.   If you look closely, you can still see damage caused by the Ottoman bombardment. After the fall of Famagusta, a minaret was added to the northern tower, and the church converted into a mosque.

There are three entrances at the western end, and above each of them is a plinth, which is assumed to be for a statue, although there are no records to prove this. Above the main door is a large round window with decorative tracery. This is a common feature of church buildings of the time, and is commonly known as a rose window.

Outside the entrance, the old tree that you can see is a fig-mulberry. It is reputedly the oldest tree in Cyprus, having been planted around the same time that the cathedral was built.

After the fall of Jerusalem in 1291, the Lusignan kings, after having been crowned king of Cyprus, came to this cathedral to be crowned king of Jerusalem. It was also here that the last Lusignan ruler, Caterina Cornaro yielded to the pressure of the Venetians and abdicated.

Inside the mosque, in accordance with Muslim practice, all images of the human form were removed, and any frescos on the walls were covered with plaster, and who knows what treasures remain hidden underneath. The Ottoman leader, Lala Mustafa destroyed the alters and statues to the saints. Stained glass was replaced by clear glass, if replaced at all. He removed gravestones, and even human remains were removed, including thos of the last two Lusignan kings of Cyprus. As in all mosques, the floor of the church was covered by a carpet, so there is a possibility that some gravestones remain. One, however, can still be seen. In the north west corner, is the tomb of the Bishop of Famagusta, who is depicted holding his pastoral staff. He was ordained in 1360, and died in 1365 from a chill received while swimming in the sea.

The apse, now without an alter, is topped by a form of corona, representing not just the crown of Christ as king of heaven, but also the crown of the Lusignan kings of Jerusalem.

Lala Mustafa Pasha was born in the Ottoman province of Bosnia, at the village of Sokolovic, and brought to the royal  palace during the reign of Selim I. he was promoted to the prestigious position of chief caretaker of the imperial stables by Suleyman the Magnificent in 1555. He became a vizier (a high-ranking political advisor) to Sultan Selim II, who appointed him as commander-in-chief of the Ottoman forces for Cyprus. He died in 1580.