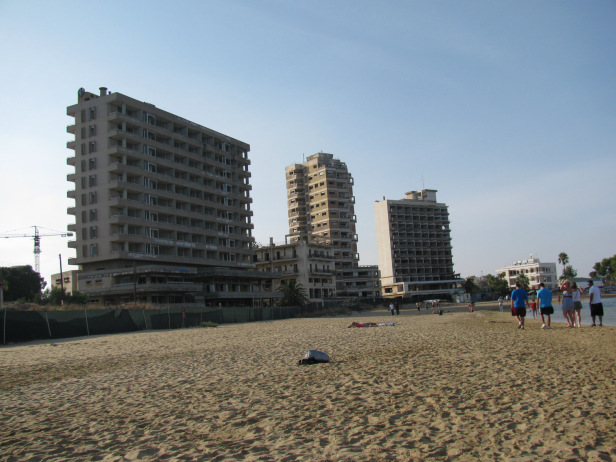 In the 1970's, with the decline of Beirut as a holiday destination, Varosha stepped in. Many new high rise building were constructed to cater for the increasing number of tourists, and by 1974, Famagusta, and in particular the suburb of Varosha had become the number one (almost the only) tourist destination on the island.

In 1974 Turkish Cypriots from the surrounding areas had sought refuge inside the walled city. Greek Cypriots, on the other hand, mainly congregated in the Varosha area of the town. As the Turkish forces approached, most of the population of Varosha, around 40,000, fled to the south. Thinking they would be back within days, most of them left all their possessions behind.

After the cease fire, Varosha was made part of the UN buffer zone, although it is still controlled by the Turkish military. There are, however, various areas where the view into the restricted area is quite good.

Since 1974, the town has remained untouched. Weeds have taken over the streets, the buildings are gradually crumbling, and the beach is deserted.