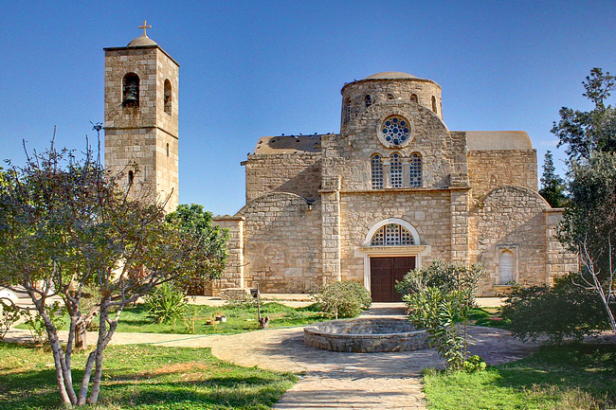 St Barnabas was one of the founders of the independent Greek Orthodox church, and is the patron saint of Cyprus.   He, was born in Salamis to a Jewish family of the Levi clan, (the Levites from which the priests of the temple in Jerusalem were chosen), who had emigrated from Syria to Cyprus. He was originally called Sosis, a variant of Joseph.

While undertaking a religious education in Jerusalem, Barnabas was able to witness some of the miracles of Jesus, and in 33AD, he took up the faith of Jesus, and gave the family properties that he had inherited to the early church and the poor of Jerusalem.

While he was in Jerusalem he was appointed Archbishop of Salamis, and in 45AD he returned to Cyprus, accompanied by his cousin and follower John Mark, and by Paul of Tarsus. The plan was to convert the sizable Jewish community to Christianity. Although he did not have a great deal of success, he managed to impress the Roman governor of the island, Sergius Paulus, to such an extent that he adopted the faith. Cyprus, therefore, became the first country in the world with a Christian ruler.

During a second visit to he island in 75AD, Barnabas was arrested and imprisoned in a Salamis synagogue. The same night, a mob of Syrians stoned him to death. His remains were wrapped in a sheet and hidden in some marshland, prior to being disposed at sea.

However, John Mark and some converted slaves from the local temple retrieved Barnabas' remains. They secretly buried them in a tomb beneath a carob tree to the west of Salamis, John Mark placing a copy of Mathew's Gospel on his cousin's chest. Hotly pursued by the Jews, who had discovered their plan, they escaped to Nicosia, where they managed to elude their pursuers and escaped to Egypt.   The suppression of Christianity in Cyprus continued, and the tomb of St Barnabas was forgotten.   By the 5th century AD, however, the Christian church had been re-established. The church of Antioch, having been founded by Peter, claimed precedence over that of Cyprus. The church on the island argued that as it had been founded by the Apostle Barnabas, it was of equal rank.   In 477AD, Bishop Anthemios had a dream in which he saw the location of the long lost grave.  After his dream, the Bishop ordered the opening of the tomb. There they found a body, which was identified as Barnabas by the Gospel of St Mathew lying on his chest.

Post haste, the bishop set off to Constantinople (now Istanbul) to present the bible to the Byzantine emperor, Zeno. Delighted by this gift, the emperor granted autonomy (independence) to the church in Cyprus. To this day, Cypriot bishops have the right to elect their own archbishop who is entitled to wear imperial purple and wield a sceptre instead of a pastoral staff. In addition, in imitation of the Byzantine emperor's custom, they are allowed to sign documents in red ink, a right which Archbishop Makarios exercised when signing the document granting Cyprus independence form Britain.   In addition to granting independence, the emperor funded the building of a magnificent church on the spot where the tomb was located. It was badly damaged during the Arab raids in the 7th century, and all that remains today are some foundations.

The building that we see today dates from the 1750s. Once the centre of the Cyprus Orthodox church, the monastery is still in good condition. Outside the church there is a courtyard, surrounded on three sides by buildings that once housed the monks and pilgrims coming to pray at the monastery.

Over the years, the number of resident monks reduced, and by the 1950s consisted of just three monks, Charitan (born 1887), Stephanos (born 1894), and Barnabas (born 1897). These three actual brothers dedicated themselves to the church from 1917 onwards. They took care of its upkeep, even building the bell tower in 1958. Most of their time was spent painting many of the frescoes and icons that are now on display.

After 1974, the monastery and church stayed open, and religious ceremonies were held there, as the three brothers had stayed on. However, by 1976, old age and illness was taking its toll, and they decided to retire to the south.

About 100 yards from the monastery, there is a small mausoleum built on the spot where the saint's remains were discovered. There are 14 steps which take you down to the cave under the building where the body of St Barnabas was hidden by his friends. The tomb was renovated (which included building the steps) in 1953.

Although the three priests left in 1976, the monastery was maintained, as it continued to attract visitors. In 1991, a restoration project was started.  The church has been restored and has been turned into a more comprehensive icon museum with the addition of new icons. The garden was redone, and the rooms of the monastery have become an archaeological museum.   The monastery of St Barnabas is very important to the Orthodox Church, and is considered a place of pilgrimage. The opening of the border has seen a vast increase of the numbers of visitors to the site, and there are frequent church services held there.   June 11th is the saint's day, and a special mass and festival was held here till 1974. People would come to the monastery to hear readings from the life of the saint. After a gap of 31 years, this event was reinstated in 2005.